Without a doubt, I can truly say that my week spent in Luján, Buenos Aires was an enjoyable, inspiring, and life-changing experience. I was even thrilled to have the opportunity to travel to the federal capital of Buenos Aires with Barbi and her husband. Although it was only for one day, the trip was very much worth it. That Sunday night, after returning to the house tired, but content, I was ready to begin my week in shadowing Barbi as she went to the different private schools where she teaches at every day. On Monday, during the second half of the day, I went with her to Colegio Angel Gutierrez, which is an institution that offers English education in three distinct levels. These three levels include jardín de infantes (kindergarden), nivel primario, (primary level) and nivel secundario (secondary level). But, at this particular school, Barbi only teaches the younger children. Of course, the small pupils were perplexed upon my entrance into the classroom but after introducing myself to them, they were eager, enthusiastic and curious to learn about U.S culture.

Although I was technically on a vacation during this week of May, which is a perfect time to sleep in in the morning, that Tuesday for Barbi and I (May 23) began at around 7:00 AM. But, this time, I didn’t mind sacrificing sleep because I knew that I was about to meet many dedicated students, passionate for learning, especially about U.S culture. I prepared a PowerPoint presentation specifically for them that shared who I am and also talked about the cultural differences that I have observed here in Argentina such as diet/cooking, the concept of time and religion.  We arrived at Colegio Nuestra Señora de Luján, the oldest private catholic school in the area, at approximately 7:30 AM. I was in awe at the vastness of the institution and the number of students who filled the hallways, and marveled in amazement of how much energy they had at this time of morning. I delivered presentations to adolescent students in distinct classes that were divided up according to their English level. In our discussions, I also asked them to share any stereotypes that they have when they hear about the United States or meet someone from the country. Words began to jump out from left and right such as Trump, the wall, McDonalds, junk food, power, money and so much more! I was even more thrilled when, after classes were over, students gathered around me to ask more questions about my experiences here in Argentina. Barbi told me that their curiosity of learning so much about me is a result of the fact that not many foreign exchange students visit their school. Therefore, they wanted to take advantage of the opportunity to know more about me as an individual from the U.S. 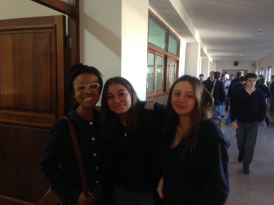 During the second half of the day, Barbi and I went straight to another private school, Colegio San Patricio en Luján, about fifteen minutes from the previous institution. There, I shared even more presentations with both younger and older students. In total, I gave at least twelve presentations, so by the end of the day, I was definitly worn out. But, I was also happy that students had the opportunity to learn more about U.S culture, ask their questions and share their concerns.  For instructors here in Argentina who teach at private institutions, hopping from  school to school each day to teach different groups of students is considered the norm. The salary for teachers here is not the best, and for this reason, many have to work extra hours and teach many classes.

My sole intention of traveling to Luján was to visit Barbi and her family, enjoy a day excursion to Buenos Aires and deliver presentations to her students. But, as I have learned so much already, traveling is full of delightful surprises and I was certainly in for one when, during dinner one evening, her husband invited me to be interviewed on the radio and television program that he is a part of on a weekly basis. Without any second thoughts, I enthusiastically accepted, thanking him for the invitation. I knew I had packed my business outfit for a reason!

At around 8:00 A.M that Wednesday (May 24) I accompanied Barbi’s husband to the radio studio, preparing my mind for the upcoming interview. I was truly ecstatic to be on the program in order to share my experiences here as a foreign exchange student from the United States.It’s one thing to be on a radio and television program in the country where you were born, but to be interviewed live on a program in a foreign country while studying abroad?! That’s not something that happens normally! After the interview, I went with Barbi to the same institutions as the day before, gave more presentations and afterwards, was even invited by her students to a picnic at High Cross, another private school. My day did not end until around 11:30 PM because I had to attend another interview at the television studio at 10:00 that evening. Having the chance to be live on both a radio and television program brought memories back to the surface. When I was in middle school, (that seems like such a long time ago) every morning, I was on the school’s television, delivering the announcements. I remember being in the studio with another friend  of mine and we would always write, edit and make last minute changes to the script that we would read from in the live broadcast. So, I guess you can say that journalism as a field of study has always been of interest to me since I enjoy writing, editing and presenting information. This experience of being on the radio and television program has inspired me even more to pursue journalistic translation as a future career. 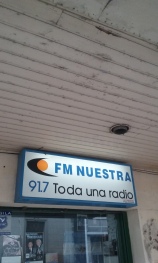 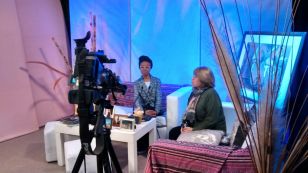 As the common saying goes, “all good things must come to an end”, and so was my week spent in Luján, Buenos Aires. My last day there, that Thursday (May 25), was considered feriado, or an Argentine national holiday. This day (Día de la Revolución de Mayo) celebrates the very first independent government in Buenos Aires. Since everyone had off, Barbi, her husband, their baby girl and myself took about a twenty minute trip to an Aero Club, where I was able to try locro, a common national dish that is reserved for this particular day. It’s considered somewhat, excluding the cow tripe (beef stomach) as a common ingredient, a healthy soup due to the high amounts of vegetables in it. I was taken aback at the fact that I ate cow tripe and was not too fond of the fact that some bones were present in the soup, but tasting this thick Argentine stew was definitely a cultural experience in itself. 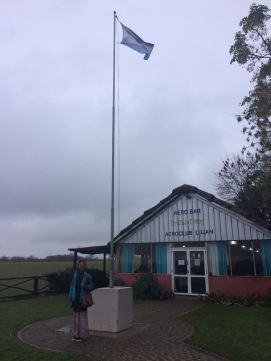 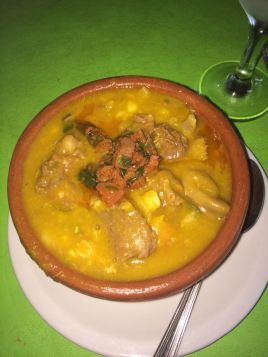 It’s so hard to believe, but in three more weeks, I will begin packing my suitcase to return to the United States. Every time I think about the plane landing back at the airport in the U.S, and embracing my family and friends after not seeing them for five and a half months, my eyes begin to fill with tears. Although I’m at the point now where I am ready to go back home, there is still so much more that I want to do and take advantage of here. So for now, I’m taking it one day at a time, and I’m looking forward to sharing my final study abroad experiences here in South America with you all as the final countdown begins.