“If the plan doesn’t work, change the plan but never the goal.” (unknown author)

Since my very first blog entry, you all have probably noticed that I begin each one with a quote, both in Spanish and in English. Most of the time, I try to search for quotes in English that correlates a lot with what I will be talking about and I do my very best to translate them into Spanish. I may not have mentioned this before in my previous entries, but I’m studying abroad here in Argentina to fulfill both my Spanish and International Studies major. At Susquehanna University, 100% of students study off campus and all language majors are required to study for an entire semester in a region where the language they are studying is the principal dialect. Of course, all International Studies majors are encouraged to travel the world and study other languages. My emphasis in this particular major is the developing world in Latin America, so what better place to study abroad than in Argentina, a well-known developing country?

It’s so difficult to believe that once I return back to the United States, it will be time to start submitting applications for jobs to have after graduation in 2018 and with my double major, the possibilities are endless. However, my dream job is to become a professional translator either in the medical field or in international journalism. I want to utilize my language skills to enhance the well-being of various people that I meet on my life’s journey. For this reason, I came to Argentina not only to get immersed in the language and culture, but to also complete a service learning opportunity, where I would be able to volunteer to aide those who are less fortunate and need special attention. After waiting with much anticipation for the organization that I would be working with here, I finally received word that I would be volunteering at a place called “Manos Abiertas” or “Open Hands”. This organization focuses on serving and showing love towards those whose lives have been shattered. Volunteers have the opportunity to comfort and be there for those who have terminal illnesses and support children who have various housing situations. I was so excited to begin this work and began researching more about this inspiring organization, BUT, there were a change of plans. They had to move me to another location due to specific “contract” reasons and time constraints on actually getting it signed. It seems like the things I really like or want to do never work out the way I want them too, but who says nothing better will come to the surface?

When I heard that I would have the opportunity to work with students of different ages to help them study English, immediately, I became enthused. I have had this type of volunteer experience with working alongside students whose English is their second language. For example, in the past, I worked with an educator whose goal was to help other students from Haiti develop their English speaking skills. So, although I’m not actually volunteering in the medical field like I intended, helping students, from ages six to early adolescence, enhance their English skills can still be rewarding.

I began volunteering as an English assistant at the Lincoln Institute on April 11 and will continue helping out every Tuesday and Wednesday after my last class until June 20. Since this school is on the outskirts of the main city, it’s about a thirty minute bus ride to actually get there. Unfortunately, on my first two days, I had a difficult time finding the right bus stop to actually get off from. So after getting off of the bus, I spent at least thirty minutes walking around trying to follow the map that was given to me beforehand. I tried not to look lost but eventually, on my first day, I calmly entered a store and asked for directions on how to get to the school. By the time all of the classes are done, it’s completely dark outside and in this particular neighborhood, I feel like it’s not a good idea to walk solo at night, so I always have a teacher assist me to the nearest bus stop.

Of course, when I entered the classroom on the first day, the students were a little bit intimidated when they saw me as a foreign woman enter into their presence. I expected it so I wasn’t the least bit surprised. But, when they began to ask me questions about who I am and where I’m from, they began to feel at ease. Every Tuesday and Wednesday, I have two separate classes that I attend. I prefer being an English assistant in a variety of classes instead of just one class because I get to meet all kinds of students from various backgrounds. The teachers there are very sympathetic and are very appreciative of the fact that I am there to help them enhance the English speaking skills of their students. I learn so much from the students who have been more than happy to give me their preferences to well-known Argentine singers and books that I should look up. And they too have been asking me lots of questions from what I think about the Argentine people in general, all the way to my thoughts on Donald Trump. So, they definitely are good at putting me on the spot. (haha) The pictures that I took with the students didn’t turn out the way I wanted them to, so this week, hopefully the pictures turn out better. I will update more pictures within the next week or so. For now, here are some pictures of the institute and the classrooms that I help out in. 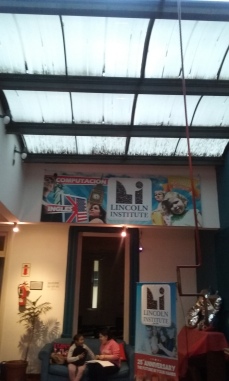 In order to receive credit for this service learning option, I have to submit a separate blog every week to the executive director of the Spanish and Latin American culture program about all of the things I have been learning and the skills that I have been developing. At the end of the eight weeks, I must submit an 8-10 page Spanish paper about everything that I have gained from this learning experience. Out of all of the binders and notebooks that I have stored away from my previous semesters in college, I’m determined to also keep all that I have written during this service learning project so that I can happily look back upon what I did and think about the positive impact that I made on these students lives.

Surprisingly, even though my goal is to become a translator,  I have received numerous comments from people saying that they can see me becoming a professor. Even one night at the bus stop, when I asked the teacher about nice apartments that I saw in the distance, she assumed that I was considering moving into that particular place in order to teach at the school in the near future.  And while being an ESL teacher (English as a Second Language) is rewarding, I’m having doubts about whether or not I want to do that for the rest of my career. So many questions about my future career continue to swarm in my mind, even more so as I approach my senior year of college, which I think is normal. The plan of utilizing my language skills in the medical field to enhance the well-being of individuals didn’t work out the way that I wanted to here, but why be discouraged? Everything that transpires on an individuals life’s journey happens for a reason and I truly believe that this service learning experience is leading me one step closer to where I’m destined to be. Will it be teaching ESL? Who knows? For now, I’m taking it one step, one day at a time, while sitting back and watching everything unfold before my very eyes.