“ Exposing yourself to various cultures is so vital towards personal growth.” Dau Voire

Although the beginning of the semester at the Universidad Nacional de Córdoba (UNC) does not officially begin until March 20, the campus is already beginning  to bustle with life. Foreign exchange students from all over the globe arrived about a week ago and other Argentine students are getting a head start on various projects for the upcoming semester. Even though I’m ready to take my main courses, the high number of students that I am seeing on campus this early makes me nervous. My home institution, Susquehanna University in Selinsgrove, PA, has a little bit over 2,000 students, compared to over 119,000 undergraduates who attend UNC. When I first began to witness this university city come alive within the past week, doubts and concerns began to cross my mind like: What if I can’t find anyone to eat with at lunch? How can I make special connections with people within a campus that is so enormous? However, this uncertainty and fear quickly vanished when I met my first Spanish speaking partner.

I am so grateful for my program, Spanish Studies Abroad, for giving us this opportunity to partner up with a native Spanish speaker. By doing this, we, as international students, can learn first-hand about the Latin American culture AND practice our Spanish speaking skills. Last Wednesday, after another day of intensive Spanish study, everyone (the international and Argentine students) gathered in a small classroom where the executive director of the Spanish and Latin American culture program made a short introduction. Even though I was sitting there calmly, listening to everything that she was saying, on the inside, my heart was racing and the nerves were really starting to kick in. I said to myself, “out of all of these native students in this room, which one will be my Spanish partner? I really hope that we can instantly click and that there’s some sort of connection.” After the short introduction, we all went to a larger room, where we sat in a circle and introduced ourselves. In order to find out who our Spanish speaking was, we each represented an animal. On my small slip of paper, it had the word “jirafa” or giraffe in English. Everyone had to go around and describe their animal in Spanish to a native speaker who also represented an animal, except they had their animal written in English. At last, after this very long process, I finally met my Spanish speaking partner, Helen. After meeting and talking with Helen, I realized that making friends here in Argentina would not be as difficult as I had originally assumed. Everyone is so welcoming, open and are very willing to get to know other people. As Helen and I began to talk more and more, I found out that we have a lot in common. For example, she loves studying languages and culture and she enjoys volunteering in her community.

Last Sunday, Helen and I met at el parque de las tejas (a picture of the park is in my “First Week Impressions blog post from February 19, located just on top of the photo of the church) to talk and to FINALLY DRINK YERBA MATE. Before coming to Argentina, one of the things that I was really excited about doing, was trying this herbal tea for the first time. I even did a power-point presentation centered around mate in my pre-departure course back at home. Mate consists mainly of leaves from the South American rainforest Holly. It’s also known as a liquid vegetable and tastes very bitter when trying it for the first time. For this reason, I was a little nervous when Helen handed the cup over to me in order to taste it. On top of that, one thing that I had to really prepare myself for was drinking from the same silver straw also known as la bombilla.  For anyone that knows me well enough, I am very self-conscious about germs and the thought of drinking after people that I don’t really know bothers me a lot. Here, in Argentina, there can be forty people in one room who drink from the very same straw. Normally, the mate cup is passed around to each person, and no one uses a napkin to wipe off the straw after they have drank from it. When Helen and I were sitting in the park on Sunday, the fact that it was just her and I drinking from the same mate cup, made me feel a little bit more comfortable. And despite the various accounts of people who say they don’t like yerba mate when trying it for the first time, I actually enjoyed it a lot!!  I learned that there are various ways that you can make this special tea. The one I tried was a mixture of hot water and leaves, but I’m willing to mix it up a little bit and try replacing the hot water with fruit juice or buying leaves with lemon flavor. 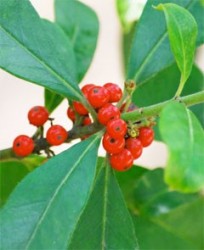 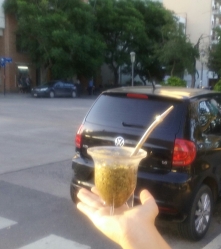 My reunion in the park with Helen last Sunday really helped prepare me for what was to come in the upcoming week. Seeing that the beginning of classes start in less than two weeks, it was time for all of the international students to take the Spanish proficiency examinations this past Thursday. Me, along with other students, have been in what’s called, “the intensive language Spanish period” where we have five hours of Spanish instruction Monday-Thursday. The amount of vocabulary and grammar I have learned have been immense. During one class, I learned at least 100 new vocabulary words. So, last week, it was time to put my skills to the test with three hours of writing and about twenty minutes for the oral exam. The classroom that the examinations were in were filled with students from all over the world. This makes me admire the diversity more and more on this campus and makes me excited to meet people from various cultures, all here with the intention of advancing in the Spanish language. Since we all had to go to a different building in order to take the exams, we had to walk further and longer than what we normally walk everyday, which gave me the opportunity to see various parts of the campus that I have never really seen before. The campus buildings are very old and the majority of them have graffiti on them which are mostly political. 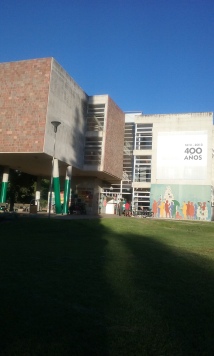 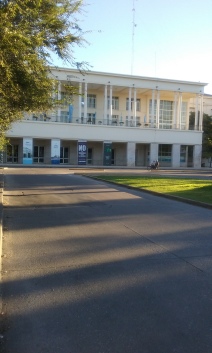 I know without a doubt that my exposure to the Spanish language and culture will become more and more real as I continue to meet other native speakers from Latin America throughout the semester. I realize that in order to make the most out of this experience and learn new things about the culture, it’s important to step out of my comfort zone and really value the beauty of immersion. For me, trying mate for the first time with someone, was a huge step out of my comfort zone, because I wouldn’t have shared a beverage like that with anyone I didn’t know back in the United States. Meeting and talking with various students from all over the world, such as two ladies from Haiti, confirms that diversity is everywhere, even in a region where Spanish is the official language. As I continue to meet wonderful new people, learn and experience the traditions and customs of the people here and anticipate the arrival of the massive amounts of diverse students on campus within the next week, I realize that cultural reality is unfolding right before my very eyes.